The weeks in Amboseli have flown by. Still no rain, but it feels that I have landed in the Lion King! Everywhere are animals, especially baboons, zebras, elephants, giraffes, buffalo and wildebeests. It is actually rather difficult to not see any animals, even if you want to. We found a driver that lives in Kimana named Robert. He is really a good guy that runs two orphanages and we are pleased with his company.

Olivier’s main focus is to compare three fenced areas of varying ages (2, 4 and 14 years) in Amboseli, to see the effect of the enclosures on the microclimate. The fences have been placed to prevent overgrazing, which is mainly due to elephants. 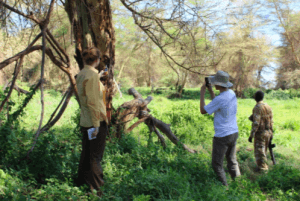 During these two weeks, we installed soil moisture sensors, took soil samples and measured the air moisture and infiltration in these three plots. There were a lot of the elephants and buffalo in the two oldest plots. At one point, buffalo were standing 20 meters from us, so the adrenalin rush was quite high I can assure you! Luckily two rangers accompanied us when we went into the field. The photo below shows an action moment of our fieldwork. Olivier takes a picture for the soil moisture sensor and I measure air moisture and temperature. While we are busy, the rangers pay close attention to the surroundings to prevent scary creatures attacking us.

It is lovely to see so many animals, but also quite annoying for fieldwork actually. When we went back a few days later to check the soil moisture sensors some were pulled out and even five sensors were completely destroyed! This is probability due to baboons and elephants. To be continued…

At the moment, we are in Kuku at the MWCT camp. The people the work for MWCT made us feel like home already. It is definitely different than Amboseli; more vegetation, less wildlife and tourists. I am looking forward being here for two months! See you next time. 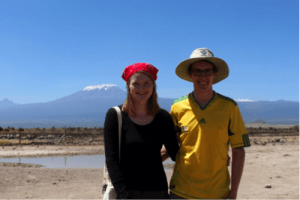