blowUP media the Netherlands and Justdiggit have been partners since 2016. For the past five years, they’ve been supporting us by broadcasting our awareness campaigns on digital screens throughout the Netherlands. We are now happy to announce that we’re expanding our partnership to new screens in new countries.

From April 2021 onwards our campaigns are broadcasted on the largest and most impactful wide-reaching digital screens in Germany, The Netherlands, Belgium, and The United Kingdom. These screens are located in 13 major European cities and have a massive reach of 337.2 million people annually. This means they create maximum awareness for our message: it is possible to regreen and cool down the planet! 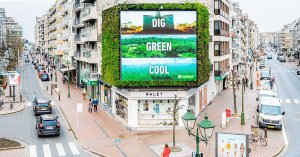 “Protecting our climate is one of the most important challenges of our time. Through the impact of our digital screens across Europe, we create maximum awareness for the Justdiggit message and can help inspire people to think and act sustainably”, says Katrin Robertson, CEO of the blowUP media group.

“blowUP media is one of our long-standing partners and earliest supporter. We are pleased about the now even more intensive cooperation and the Europe-wide support. The power of blowUP media’s huge Digital Out Of Home media will make a big contribution to anchoring our message in the consciousness of the urban target groups, and to create awareness for the most important topic of this decade: We must do everything we can to restore and protect the fragile ecosystems of our earth. Restoring nature is 37% of the solution to global warming”, says Wessel van Eeden, Global Marketing Director at Justdiggit.

About blowUP media
blowUP media, a Ströer Group company, has been an international expert of large-format outdoor advertising spaces for three decades, from Giant Posters to giant digital screens. With sizes of up to 3,000m², we help brands to be completely unmissable and reach urban target groups in Europe’s major cities. The company also offers large-format advertising towers on Germany’s most heavily used motorways. With award-winning projects, advertising sites close to the point of sales such as Duesseldorf’s Kö-Bogen and The Piccadilly in Manchester, UK, and unique monument wrappings such as the bell tower of the Kaiser Wilhelm Memorial Church in Berlin, the company repeatedly sets standards in Out of Home advertising. blowUP media is represented in Germany, the UK, the Netherlands, and Belgium and, with around 300 (D)OOH locations, offers the largest network for large-format advertising media in Europe. 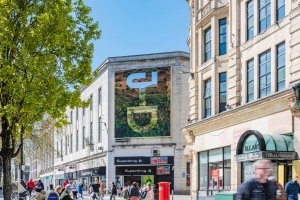