Movie Roadshow on the right track

Earlier this month Harry Chaplin, founder of the social enterprise Tatirano/MadLab with multiple water projects in Madagascar, reached out to Justdiggit and LEAD Foundation with an idea. He had been inspired by Justdiggit’s movie roadshows and wanted to contribute by putting up roadshows in their own project areas. The opportunity to promote roadshows in other countries is a good way to spread the mission of regreening in Africa and collectively engage more people to get involved.

It’s (road)show time!
The first roadshow event took place in Erada, a town in the southern region of Madagascar. As Harry and his team arrived in the 40°C heat, they were greeted under the one existing tree in the community with a traditional Tandroy welcoming dance. Although there were some technical challenges along the way, the people of Erada were eager to see the roadshow. When the movie was unable to stream on the projector, 300 people gathered around to attentively watch our movie Rainmakers 1 on a laptop with narration in the local language. After the movie, there was room for discussion which everyone partook in. People quickly made a connection between the experiences in the film with their own lived experiences in their village. At the end of the discussion, one of the village elders offered his land for water bunds to be dug on. The team brought 10 new spades with them which they gave to the community for the digging. The discussion also gave an opportunity for people to showcase their interest in this project, and more than 50 people wrote down their names to enlist on helping out. 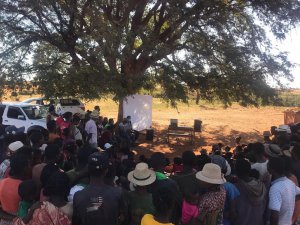 A community in action
When Harry and his team left the village, the community had already started making plans on how the bunds would be dug and where they were going to dig them. The latest update from the village revealed that they had dug over 300 bunds, which is a huge accomplishment for not only the community of Erada, but also for the overall mission of regreening Africa and cooling down the planet. Harry is hopeful for the community and believes that if the community is inspired by the change the bunds have made to their land, they can become a champion community. They have also encouraged some of the more motivated members to carry out three more roadshows which will further motivate the nearby communities in the area. 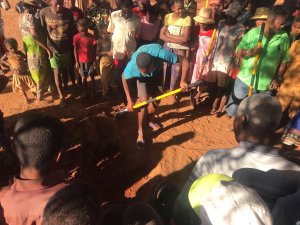 We are excited that Harry and his team implemented the roadshow in their projects. This means more green and healthier soils for the communities. A great example of the regreening movement!